The first syringes with needles are a product of the 19th century. In the 1800s, researchers began to experiment to find a way to introduce medication or drugs into the human body. In 1853, the first actual hypodermic needle came into existence. The founder, Alexander Wood, modified a regular syringe to achieve the necessary affects. He simply added a needle.

Since that time, various individuals have elaborated on or improved the original concept to produce a number of different types of syringes. Some simple variations that proved to be effective included a graduated scale and different needle types. A plunger became an integral part of the hypodermic syringe. Plastic replaced glass as technology improved making it safer and reducing the overall cost to produce. The basic components became standardized but differences still occurred – particularly when it comes to the size of syringes.

What is a Syringe?

A syringe refers to the entire unit comprised of barrel, plunger and needle. It can also indicate only the barrel portion. While syringes with needles may vary in size and proportion, the size of a barrel differs in a specific way. The marks along the side of the barrel indicate any size difference.

Sizes of a Syringe (Barrel) 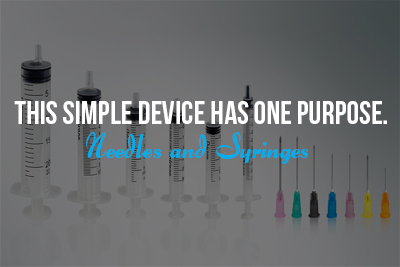 The size of a syringe barrel is indicated in milliliters (ml) or cubic centimeters (cc). 1 cc is almost equal to 1 ml. The “size” of a barrel can range between 0.25 ml up to 450 ml. The numbers simply indicate the amount of fluid a syringe can hold. These amounts will often indicate what the basic purpose of a syringe is.

An insulin syringe, for example, is commonly:

Some needles are found in a single standard size. This is certainly true of ear and nasal syringes. Their volume is usually from 57 to 85 ml.

Some measure the size of a syringe according to the needle. These may be fine and small or thicker and longer. The categorization of syringes with needles by this means focuses on the length of the needle as well as its gauge. If the number is high, the needle will be smaller than one who has a lower gauge.

When it comes to the development of syringes with needles, changes over time have produced improvements in both performance and safety. Today, you can order a needle by usage or by size. It is important to know what gauge of needle you require as well the appropriate barrel size. Talk to your medical provider to ensure you have the right syringes to suit your purpose.